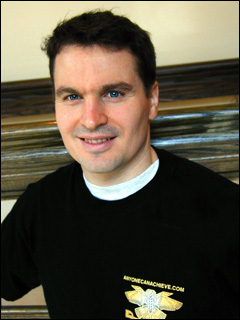 For the most part, my undergraduate course work failed to interest me, primarily because the focus was on basic concepts that seemed out of date. Fortunately, I had an outstanding teaching assistant for my biochemistry lab course.

I was born in Kenosha, Wisconsin to an urban Irish father and a Norwegian/Yankee mother from farm country.  My father spent his entire career working for public school systems.  My mother did the work at home, but developed a strong scientific interest in nutrition, particularly the interface of diet and cancer.  My siblings and I grew up taking a vast array of dietary supplements (antioxidants) before we left for school each morning.

Like many children born in the 60’s, I developed an intense interest in dinosaurs and archeology.  As a result, I began collecting rocks, arrowheads and fossils by age 3, and this remains an avocation I pursue to this day.

Throughout grade and high school I excelled in two apparently opposing fields; the hard sciences and the social sciences.  By the time high school graduation approached, I had decided I would pursue a law degree because it appeared that lawyers had far greater incomes and status as compared to scientists.  My mother has never been much of a fan of lawyers, so she stepped in and arranged for me to talk with an old college friend of hers.  This turned out to be Vitamin K and blood clotting researcher John Suttie of the University of Wisconsin Biochemistry Department.

While he was not too enthusiastic about careers in biochemistry, he thought a biochemistry undergraduate degree might be a good background for law school.  So I took his advice and enrolled in the University of Wisconsin, majoring in biochemistry.

Like many pre-professional students, I attempted to learn as little as possible from my undergraduate classes at the University of Wisconsin while maintaining a high GPA.  For the most part, my undergraduate course work failed to interest me, primarily because the focus was on basic concepts that seemed out of date.  Fortunately, I had an outstanding teaching assistant for my biochemistry lab course.

Greg Miggelita performed research at McArdel Cancer Research Laboratory and played semi-pro hockey.  After final exams, Greg invited us over to a neighboring tavern for beers on him.  As the beer flowed, Greg’s conversation turned towards recent paradigm-shattering discoveries in the field of cancer research.

The Harold Varmus lab had just recently reported how endogenous oncogenes could become activated through insertion of retrovirus sequences into the genome. I was so impressed with this finding that the next day I went to the library and read the article (Payne et al. Nature, 295: 209-14, 1982) despite having a hangover (one of the perils of a UW education).  This research allowed me to begin explaining to my mother how the many disparate causes of cancer might share a single mechanism, namely activation of oncogenes.

Even after this “light bulb” type of experience, I finished my degree with the intention of going to law school.  I had self-financed my undergraduate education by working part time as a butcher and a shoe salesman, and now I was broke.  Paying my own way through school probably taught the importance of perseverance and provided me with a real appreciation of the opportunities education provided.  I decided to take some time off and work full time to save some money for law school tuition.

For a year and a half after college I hustled, unloading trucks at JC Penney, fitting skis and boots at a ski hill and managing a local punk rock band.  During this time my bank account balance did not grow, and I decided to put my biochemistry degree to work for me.  I got a job working for Bibhuti DasGupta at the University of Wisconsin Food Research Institute purifying Botulinum neurotoxin.  My intention was to work a year and one half and get that money for law school.  It turned out that I enjoyed the hands-on learning of basic protein biochemistry and didn’t mind the smell of the 40-liter botulism cultures.

During this time, I met an outstanding Ph.D. student named Anne Herian who also enjoyed fossil collecting.  Of course, we would later get married.  I stayed on the job three years, and a post-doc in the lab, Bal Ram Singh, convinced me that I didn’t want to be a lawyer.  Instead, I enrolled in the Anatomy and Cell Biology graduate program at the University of Cincinnati.

At Cincinnati, I joined Linda Parysek’s laboratory principally to learn how to apply molecular biology techniques to questions in cell biology.  Linda had isolated and cloned a novel neuronal intermediate filament protein that was eventually named peripherin.  Linda permitted me to have a free hand in designing my thesis project and I was able to develop a research direction related to cancer.  This involved cloning the human peripherin gene, studying its regulation in neuroblastoma cell lines and using peripherin antibodies as tumor markers for neuroblastomas.

Shortly after I started my Ph.D. program, Anne and I were married.  To my delight, she got a job as a microbiologist for a local microbrewery.  For a Wisconsin native, free beer is almost as good as free cheese.  When it came time to leave Cincinnati, it was Anne’s turn to pick the place we would go.  She chose to work on infant formula at the Nestle research and development center in New Milford, Connecticut, an hour and twenty minute drive from Yale. Yale University offered many postdoctoral opportunities, but I was very fortunate that my c.v. came to the attention of Arthur Broadus, chief of the endocrine section.

Arthur’s lab had recently cloned the humoral hypercalcemia of malignancy factor, PTHrP, and was now entering an exciting phase where important basic questions about the molecule were being asked.  These were: 1) what was the physiological role of the molecule? 2) how was its expression regulated in tumor cells?  I began studying regulation of PTHrP gene expression in squamous cell carcinoma cell lines and exploring a potential relationship to p53 status.  After a fast start, the work bogged down mainly because our in vitro assays could not recapitulate the complexity of the regulation of the endogenous PTHrP gene within a cell or tumor.  As part of this work, I began evaluating PTHrP gene expression after sunburn-mediated induction of p53 activity in mouse skin.  I found the biology of sunburn to be fascinating and began probing the field of dermatology to understand this system better.  At this time, Arthur’s lab began producing several transgenic and knockout mice to evaluate PTHrP function, and I was given the responsibility of evaluating the skin phenotypes.  These mice turned out to be a treasure trove of information, shedding insight into skin patterning, hair follicle growth and skin aging.

During my postdoctoral years, Anne quit her job with Nestle so she could work full time taking care of our daughters Sarah and Cecilia, born in 1993 and 1996 respectively. After completing my postdoc, Anne and I decided we would like to return to the Midwest so we could be closer to our families.

In 1998, Indiana University Medical Sciences Program offered a very unique opportunity for us.  Here was a job in a wonderful small town, close to excellent fossil hunting, and within 50 miles of an outstanding dermatology department at the IU Medical Center.  With the help of Dan Spandau and Jeff Travers of the Dermatology Department, I have established a research program centered on exploring PTHrP function in skin.  With the collaboration of Zhor Bouizar from Paris, I have turned my interest in PTHrP gene expression into a program evaluating the expression and function of the peptide in metastatic breast cancer.  Recently, in collaboration with Steve Williams of the IU Cancer Center and Ken Nephew of the Medical Sciences Program, I am using my background in regulation of gene expression to help develop an ovarian cancer-specific promoter to drive novel therapeutic agents in advanced ovarian cancer patients.  I have been very impressed with the collaborative spirit at the IU School of Medicine, and I look forward to future research work or fossil hunting with my fellow faculty members.