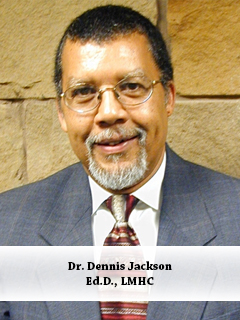 Dr. Jackson is Professor of Psychology and Chairman of the Psychology Department at Martin University.

He is past president of the Indiana Counseling Association. He served the counseling association for two terms.

He has served in numerous administrative roles at Martin over the past 15 years.

Appointed by the mayor of Indianapolis, Dr. Jackson served on the Board of “Smoke Free Indiana” for two years.

Dr. Jackson developed the Gerontology undergraduate program at Martin. He has professional expertise in the clinical area of child sexual abuse.

Dr. Jackson is a Licensed Mental Health Counselor in Indiana.

“In the process of working toward their career goals, students need to be mindful to do all they can to reconcile their perception of reality with the objective reality out there!  Students need to deal with all the necessary things their graduate program requires. They need to get in this habit early on. The realistic orientation is a big advantage as it strengthens the likelihood of program completion and it aids successful entry into their future profession. Therefore students must deal with what is prescribed by their program. If they do this, their path to success will be facilitated.  Also, students should find faculty mentors whose advice they trust. I had great mentors with whom I formed good friendships both in my Masters program at Ball State and in my doctoral program at Indiana University – great professors such as Paul Monger and Ron Baker.”

“My story is straightforward.  I earned a Fine Arts degree in undergraduate school but I became interested in psychology. I applied to the Masters Psychology program at Ball State.  I was admitted after taking graduate admissions exams but I had no prior courses in psychology, I knew I had my work cut out for me.  This was hard I had to learn a lot of psychology is a relatively short time. I had to learn a whole new language. My advisor told me I needed to make A’s in the first three classes I took, to show my ability. I in fact did that and I kept going. After completing my master’s degree, I was admitted to the doctoral degree program in counseling psychology at Ball State along with two other friends but not long into the program our advisor passed away – a series of things happened but eventually with the help of Ball State I transferred to the doctoral program at Indiana University in Bloomington where I finished my degree work.  My motivation to go the distance, in part was because my Ball State Advisor took a chance on my success and with mentor’s encouragement, I saw it through.