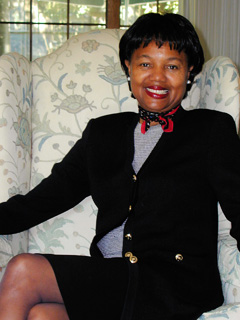 Carolyn’s teaching and research areas are intercultural communication, public dialogue in America, civic engagement, pedagogy, and communication in Black America.  In 2007, Professor Calloway-Thomas was invited to participate in the Oxford Round Table conference on diversity and public policy at Oxford University in England.  Her national awards include a Ford Postdoctoral fellowship; a Fulbright scholarship to Nigeria, West Africa; a Carnegie scholarship; the National Communication Association’s Robert J. Kibler award; and the Distinguished Alumni award from Grambling State University.  She holds a BS degree from Grambling College, an MA degree from the University of Wisconsin, and a PhD degree from Indiana University.

On the road to St. John Baptist Church, only six miles from southern Arkansas,    is a clear creek where my parents dreamed of their future.  I was born near this beautiful place, in the small town of Lillie, Louisiana,   as the third of   ten children of Alvin and Idell Calloway.  My mother was a high school graduate and my father dropped out of school at an early age, and later worked in the paper mills in Bernice.   Thanks to my mother and father, I learned the virtues of hard work, self reliance, dedication and service.

It is simply not possible to think of  my communication career path without mentioning one powerful force, my eldest sister, Catherine, who passed away on January 17, 2001.  She was my first compelling mentor, even at the young age of six years!  In fact, I date my interest in speech communication from the moment that I heard “Sis,” as we called her, practicing a poem for recitation in Mrs. Earline Nute’s first grade classroom.  “Dark brown is the river, golden is the sand; it flows along forever with trees on either hand.”  The exquisite  way that my sister, Catherine, recited her lines spoke to my young soul such that I got up the next morning and followed her to school, even though I was not quite ready for prime time.   Upon first hearing the poem, I wanted to greet the people who had helped my sister shape such pretty words.  When I arrived at school Mrs. Nute sent me home, and the next morning I got up, dressed myself, and followed my sister to school again. The pattern of getting up, going to school, and being sent home again, continued until my parents and the teacher relented.  As a result of my tender tenacity, I entered first grade at Elliott High School in Bernice, Louisiana at the age of five.  This was a lesson I never forgot, the power of persistence!

Looking back, during those defining moments, I did not know that the lines that my sister had recited   were from Robert Louis Stevenson’s sweet little poem, “Where go the Boats.”  But I knew for certain, however, that the words thrilled my heart, and I kept them safely within my bosom.  Thus, at the age of five, I fell in love with words, the “spoken “word, the “hushed” word, and the “preached” word.  And throughout high school, undergraduate and graduate school, I pursued a career in communication and culture that instilled in me a vision of what could be.