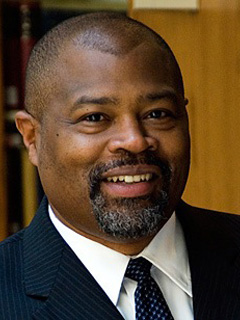 Anyonecanachieve.com is pleased to announce that Professor Kevin Brown has agreed to serve as a mentor for our online program. Kevin is an exceptional professional who continues to devote a great deal of time to helping young people to be successful. He is an exemplary role model. His effort in many different venues has assured the success of numerous college students.

Kevin Brown is a Full Professor at the Maurer School of Law in Bloomington, Indiana. He served as the Director of the Hudson & Holland Scholars Programs. The programs recruit high achieving underrepresented undergraduate students and such students account for more than 20% of the black and Hispanic students on the Bloomington campus.

In 2005, his book, Race, Law and Education in the Post Desegregation Era was published by Carolina Academic Press.

What early (childhood/ adolescence) experiences sealed the decision to go to law school?

When I was growing up there were two shows on television for lawyers, Perry Mason and Judd for the Defense.  I was an avid watcher of each show.  Also, by the age of 7, I was telling my parents that I wanted to be a lawyer.  I am also certain that they encouraged this desire once I stated it.  We went to Washington D.C. when I was 8 and my parents made certain to take me to the Supreme Court Building.

What general advice do you typically give to young people regarding law as a life career?

A lawyer has two major assets, his or her legal knowledge and connections.  If you want to be a lawyer, you need to both be intelligent and well connected.  Lawyers charge at least $200 per hour. The good ones are charging over $400 per hour and more.  If someone is going to pay that kind of money for your advice and time, then you need to be the kind of person that makes others believes that your time is worth the amount you charge.  So if you want to be a lawyer, you also need to dedicate yourself not only to becoming as intelligent as possible but also to getting known – (networking) with powerful people.  You also need to develop an exceptional personality, one that exudes confidence, honesty, good judgment and integrity.  Make certain to live up to your word in all things and do what you say you are going to do.  Take responsibility for your actions.  Admit to others when you make a mistake.  And as Tupac would say “fix what you break.”

What hurdles do students face in their effort to get admitted to and complete law school?

In getting into law school the two primary factors are under graduate grade point average and score on the Law School Admissions Test (LSAT).  If you want to be a lawyer, you need to dedicate yourself to your academic work.  People who are in the middle of their class are not the people that others pay $400 an hour for their advice, nor should they.  In addition, since you have to take the LSAT, you had better spend a couple of years studying for the test.